As Summer Heats Up, Be Extremely Careful about Leaving Your Kids in Your Car 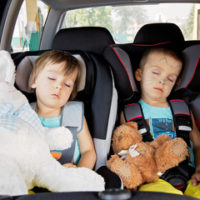 You may see a sign as you enter the supermarket asking if you remembered to bring your reusable shopping bags, but you are less likely to see a sign asking if you remembered to get the baby out of the backseat. It may seem unthinkable if it has never happened to you, but people do leave their kids in hot cars for longer than is safe. Tragically, dozens of children die every year from heat stroke, and countless others suffer serious heat exhaustion symptoms due to being left inside of a car on a hot day.

Kids can be left in hot accidentally or intentionally

It’s hard to imagine forgetting you left your kids in the car, but about half of all child heat deaths in cars occur when the parent was unaware the child was left in the car. You may have a lot on your mind already, and perhaps you took a call as you were pulling into the parking lot which further distracted you. Children in rear-facing car seats are at an even greater risk of being forgotten, due to being “out of sight, out of mind” for an already distracted parent.

It’s not always an accident that a child gets left in the car. Sometimes you are only running in for one minute just to grab a certain item or two, and you know the trip will go much quicker if you don’t have to manage a toddler in tow the entire time. Nevertheless, shopping trips are unpredictable, and people naturally end up buying more items than they went in to purchase. Another unpredictable factor is the speed of the checkout line and whether a shopper ahead of you (or you yourself) will encounter a time-sucking delay at the cash register.

A university research study on  the effect of leaving children in hot cars was recently published in the Journal Temperature and popularly described in a Forbes magazine article. According to the study, as reported, the interior of a car left in the sun on a 100-degree day reached 116 after one hour. Even in the shade, while the interior temperature of the car remained steady at 100 degrees after one hour, different surfaces inside the car still climbed dangerously high, including 105 degrees on the seats, 107 on the steering wheel and 118 on the dashboard. If a child is left strapped inside in a car seat, the surface of that seat could become unbearably hot. Also consider that different children have different tolerances for heat exposure, and the interior temperatures increase significantly as outside temperatures rise above 100 degrees.

A sensible-seeming solution is the installation of an alarm that will alert the driver to check the back seat after turning off the car if it senses a child may be in the seat. We already have alarms that tell us when a door is not fully closed or a seat belt isn’t engaged, so a car seat alarm seems like a reasonable extension of already-existing technology. Although an alarm wouldn’t stop you from leaving your child in the car on purpose, it may serve to educate and raise consciousness among parents who are not aware what a dangerous act this can be.

H.R. 2801 in Congress, the HOT CARS Act of 2017, would direct the Department of Transportation to issue a rule requiring all new passenger vehicles to have a child safety alert system. This bill was introduced in June of 2017 but has not seen any action since and seems to have a snowball’s chance in summer of passing.

Some car manufacturers have already stepped in and offer this feature even without a government mandate, including a number of GMC SUV models where the feature is standard for 2018. Until this feature becomes universal or you buy a new car, there are a number of products on the market concerned parents can purchase to remind them not to leave their most precious cargo alone in the car. These products include child car seats with built-in sensors, sensors that attach to a car seat’s harness or fit under the cushion, and even smartphone apps.

You and your kids will spend a lot of time in the car this summer as you head to the pool, the park, the beaches, movie theaters and shopping malls. Have a safe and fun summer, and don’t forget to check the backseat!