Is Your Car’s Lane Departure Warning System Bugging You? Too Bad. It Could Save Your Life. 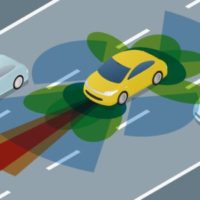 Some people still can’t manage to put on their seat belt until reminded by the car’s incessant beeping. Now imagine having your car alert you every time you start to drift outside your lane. Uncomfortable with the obtrusiveness of this new technology, some drivers have chosen to forego the option to install lane departure warning system on their new vehicle, or they have disabled the feature when it came standard on their car. These drivers may want to think twice. A recent study by the Insurance Institute for Highway Safety shows that lane departure warnings are effective in preventing accidents, including those causing injury or worse.

Lane drift accidents are particularly dangerous and deadly. In fact, statistics show them to be the cause of about one in four fatal crashes. A lane departure warning system may not help much if you are intoxicated or have a health emergency behind the wheel, but if your car drifts because you are distracted, tired, or drop something on the floor and reach down to get it, this little reminder can save your life. To be less dramatic, it can also keep you from an accident which could damage your vehicle or another’s and cost you thousands in liability claims and increased insurance premiums.

Sensors on the chassis scan the road for lane markers and alert the driver when the vehicle is drifting over these markers. The driver may be alerted with a beeping alarm, a buzzer in the seat, or other alerting technologies. Lane departure warnings currently come standard on only about six percent of new vehicles, but they are available as an option on 57{d975aeaddbfe3a79111a58dece9c72d00f96b60147cea3c299f19c6387a30009} of new cars market-wide. Expect these numbers to increase significantly in the coming years.

After being alerted by the lane departure warning system, it is up to the driver to manually correct course and steer back into the proper lane. Another available technology, lane assist, actually steers the car back into the lane, either by controlling the steering directly or by applying the brakes on one side of the car. As noted in a recent article on lane departure and lane keep assist technologies in Digital Trends magazine, either system may also work in tandem with other safety technologies such as adaptive cruise control and autonomous emergency braking to hopefully avoid a serious crash, from a sideswipe or broadside collision with a neighboring vehicle to a potentially-deadly head-on collision should the vehicle drift into an oncoming lane of traffic. Some of the more exciting new lane keep technologies include side mirror cameras that feed video to the dashboard, all the way up to Tesla’s Autopilot, a full-on autonomous driving feature (although drivers should stay alert and be ready to assume control at any moment).

Lane Departure Warnings Appear to be an Effective Safety Technology

A recent study conducted by the Insurance Institute for Highway Safety found that lane departure warning systems yielded a 14{d975aeaddbfe3a79111a58dece9c72d00f96b60147cea3c299f19c6387a30009} reduction in the chances of a crash and a 23{d975aeaddbfe3a79111a58dece9c72d00f96b60147cea3c299f19c6387a30009} reduction in the odds of being injured in a lane-drift collision. According to the study, if every car had a lane-departure warning system in 2015, there would have been 85,000 less crashes, with 55,000 less injuries to vehicle occupants. These impressive numbers may actually be underestimated, since the IIHS study looked at cars with the safety feature installed, but not necessarily enabled. Some cars involved in the study may have had the feature turned off, leading to an underreporting of the efficacy of the feature to prevent crashes.

Final thoughts? If you’re shopping for a new car, look to see if a lane departure warning system is available as an option, or if it comes standard on a model you are considering. And if you do get a car with lane departure and find the warning alerts annoying, take some time to get used to the feature before you decide to turn it off. Your passengers and the drivers around you may thank you.