Do You Need to Wear a Seat Belt if Your Car has Airbags? 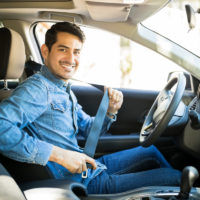 Yes, you do, and for a couple of reasons. For one thing, it’s the law just about everywhere. Currently, 34 states have primary seat belt laws, meaning you can be pulled over and ticketed for not wearing a seat belt. Fifteen states have secondary laws, where you can only be cited for not wearing a seat belt if first stopped for some other reason. Only in New Hampshire, home of the “live free or die” state motto, can you choose to go beltless without fear of a traffic ticket (assuming you are 18 or older; the state does have a primary seat belt law for children under 18). None of these laws provide an exception for cars equipped with air bags.

The other reason to wear seat belt even if your car has airbags is that there are many times seat belts can keep you safe in a crash when the airbags don’t deploy, and even if they do. According to the NHTSA, airbags are designed to deploy in a “moderate or severe” crash, which is defined to include relatively low-speed impacts. However, you can definitely get hit hard enough to be thrown forward if unbelted in a crash where the airbags don’t deploy. Also, front airbags only protect you in a frontal impact, and not all cars come with side-impact airbags. Seat belts can therefore be very valuable in preventing or minimizing injury in a rear-end collision, side impact or rollover accident. Even if the airbags deploy, it is important to understand that airbags were designed to work with seat belts and not serve as a replacement for them.

Should you ever disable the passenger side airbag?

Many automobile models give the option of disabling the passenger side airbag, either via a manual switch or through the in-dash console controls. Why would you ever want to disable the passenger side airbag? One reason may be to prevent it from going off in a crash when you know nobody is riding in the passenger seat. Replacing the airbags after a crash is cost-intensive and can run from $1,000 to $1,500 per airbag. Keeping an airbag from being deployed unnecessarily can save you a substantial piece of change.

Another reason to disable the airbag might be if a small child is riding up front who could be seriously injured or killed from the force of being hit by an airbag, which is designed to protect a much larger and heavier adult. An infant in a rear-facing car seat in the front passenger seat is especially at risk of serious injury or death from an airbag deployment. Of course, the safest place for infants and children is always in a rear seat with an age-appropriate child car seat or properly adjusted seat belt. State laws typically require children of a certain age to ride in the back, although children may still legally ride up front when they are too small for the airbags. Even adults can be injured by airbags if their seat position is too close to the dashboard. Nowadays cars have their own sensors that turn the airbag off when they detect a seat positioned too close or weight in the seat which indicates a small person could be riding there who could be harmed by airbag deployment.

Another reason to turn off the airbag could be if you have a defective Takata airbag recall that you haven’t taken care of yet. Of course, the driver-side airbag can’t be turned off, so if you have an open recall for a defective airbag, please just get it fixed as soon as possible, for your sake as well as your passengers.