What is the Seat Belt Defense? 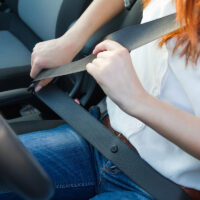 Last month we talked a lot about airbags, and we asked the question, Do you need to wear a seat belt if your car has airbags? The answer to that question was a resounding yes, in part because seat belts can protect you from severe injury or death whether the airbags deploy or not, and also because the fact your car has airbags does not absolve you from the legal duty to wear seat belts currently required in 49 states (make the safe choice, New Hampshire resident!). It turns out there is another reason why wearing a seat belt can be important, which involves whether and how much you can recover in an insurance claim or lawsuit if you’ve been injured in a car accident. Find out more below about the so-called seat belt defense, including which states allow it and which don’t, and how it impacts a car accident personal injury claim.

So, what is this thing called the seat belt defense?

If you sue the negligent driver who hit you, that driver may raise the seat belt defense, which essentially says you shouldn’t be allowed to recover for your injuries that were caused because you weren’t wearing your seat belt. To assert the seat belt defense, the defendant needs to establish three facts: 1) you had access to a working seat belt but didn’t wear it; 2) a reasonable person in the same circumstances would have worn a seat belt; and 3) your injuries would likely have been lesser or nonexistent with a seat belt.

Not All States Allow the Seat Belt Defense

The seat belt defense is controversial, and only a minority of states allow it to be used. The states that allow the defense include Arizona, California, Florida, Michigan, New Jersey, New York, Ohio and about a half dozen others. Each state treats the seat belt defense somewhat differently, so it’s important to know the law in your state. For instance, Idaho requires proof by “clear and convincing evidence” that failure to wear a seat belt caused the particular injury or damage. This is a high standard of proof compared to other facts in a personal injury case which need only be proven by a “preponderance of the evidence.”

Where the seat belt defense is allowed, it may be used to determine fault in an accident, or it may only be used to mitigate damages after the defendant’s fault has been established. In states that allow evidence of seat belt nonuse to prove the plaintiff injury victim’s comparative fault, some states limit how much fault can be assigned to the failure to wear a seat belt. This can be as little as five percent or even just one percent, while other states don’t place any limits on how much of the injury was caused by not wearing a seat belt.

Defenses to the Seat Belt Defense

When the seat belt defense is raised, plaintiffs may still have ways to counter the defense by claiming that a seat belt would not have prevented the injuries claimed. Proving what caused an injury can require complicated medical evidence and complex accident reconstruction, including experts in car mechanics and seat belts. The type of crash and the type of injury, the position of the seat, the condition of the seat belt and its position on the body, can all influence the effectiveness of a seat belt. Defendants may use generic crash studies on seat belts to cite their effectiveness, but plaintiffs will point out that crash test dummies don’t reflect natural body types, and crash tests are conducted under ideal circumstances which don’t mirror how accidents happen in the real world. The burden is on the defendants to demonstrate the relation between the plaintiff’s injuries and seat belt nonuse in the particular crash at hand.

Final Thoughts: Wear Your Seat Belt, but Contact an Attorney if You’ve been Hit

According to the National Highway Traffic Safety Administration, seat belts have saved more than a quarter-million lives over the past 45 years. You should always buckle up for safety, but if you’ve been hit by a negligent driver and weren’t wearing a seat belt, don’t settle your claim or fail to file one until you’ve talked to an experienced personal injury attorney. Your claim for money damages may be stronger than you think.